Kate Jenkins, who graduated from Hack Reactor over a year ago, has worked since then on a small but impactful team at Ejenta, using proprietary software Brahms, developed at the NASA Ames Research Center. Brahms, originally designed to track and model the biometrics and behavior of astronauts, is now used exclusively by Ejenta, which uses it to make advances in healthcare, defense and robotics. As part of a four-person developer team (in a seven-person company), Jenkins is integral to everything the company does.

“Our tech is all based on what’s running on Brahms, which is being used on the International Space Station,” she explains. “It was originally developed to model astronaut behavior, so that a program is automatically keeping track of their energy levels and mental sharpness.”

Jenkins herself sometimes refreshes mentally on hikes and other outdoor adventures. 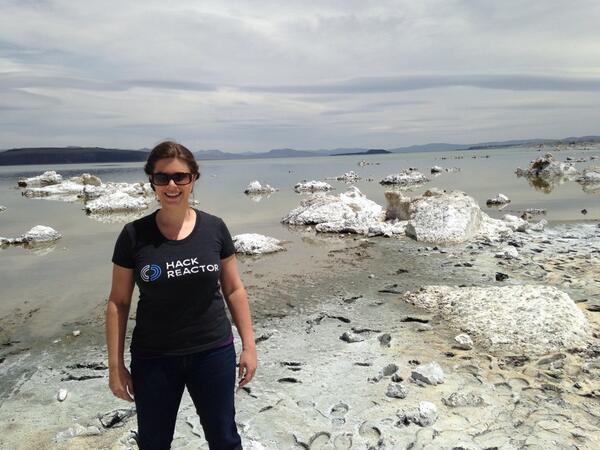 Kate Jenkins, a Software Engineer at Ejenta and outdoors enthusiast, is active in the Hack Reactor alumni community, as well as the Institute of Electrical and Electronics Engineers.

The uses of this technology, which weaves artificial intelligence with internet-of-things hardware, are limited only by the imagination of the engineers. This has allowed Ejenta to delve into diverse fields such as defense, insurance and healthcare.

“The KPI [Key Performance Indicator] for one project is preventing hospital readmission,” she says. “For instance, chronic heart failure is most effectively managed by self-management: take care of  yourself, eat better, sleep better, see your daughter, see your wife, walk a little more. We can use this technology to encourage these habits and keep people out of the emergency room. That produces better outcomes and reduces costs across the board. The future of health is people getting serious about saving money,” she adds.

The technical acumen of the end users of Jenkins’ work ranges from NASA engineers to elderly people who may have little experience with modern technology. This forces her to write clean code that can be used in a variety of situations, and to be flexible with her user experience (UX) design.

“UX is more fascinating than I initially realized,” she notes. “It’s about negotiating through what ‘intuitive’ means. In a small team, you can come to a good hypothesis and then immediately take it out to one of our beta testers.”

Prior to joining Ejenta, Jenkins worked as a research physicist at Lawrence Berkeley National Lab, a Department of Energy facility. She attended Hack Reactor to gain skills key to modern software engineering.

“Hack Reactor gave me the glue of the modern tech stack,” she says.

She also participates and mentors through the Institute of Electrical and Electronics Engineers (IEEE). She recently led a workshop that culminated in participants racing small autonomous cars through a maze. She called on fellow Hack Reactor alum Nick van de Walle to give the keynote speech at the event. Jenkins frequently calls on our alumni network to provide opportunities and ask for assistance on various projects.

While Jenkins is quite aware of the complications of being a woman in tech, she has sought out respectful, meritocratic environments.

“I’ve certainly had experiences where less than great assumptions came out, but I’ve worked to find environments like Hack Reactor and Ejenta where your performance is what matters and everything else is a non-issue. The solution is to just keep showing up, and keep proving that you can get the job done.”

Want to receive the best, most versatile coding education available? Apply to our program, online and in four major cities, today.