Hack Reactor grad Khoa Phan is putting his education to good use through his startup, Bifrost BioTech Inc., and its first product, Backbone. Backbone is a wearable, Internet-of-Things (IoT) device that combines hardware and software to help people improve their posture. It rests on the user’s shoulders, above or below clothing, and both provides support and monitors posture. The hardware communicates via Bluetooth to an app, built in React Native and is available for both Android and iOS. Phan launched a kickstarter campaign for Backbone, which reached its ambitious $24,999 goal a month before the deadline.

“So many people can potentially benefit from Backbone,” says Phan. “Look around you or check your own posture.”

With much of the population spending all day at a desk and children using computers from a young age, there is huge potential for Backbone. The success of Backbone’s kickstarter campaign bears this out. The product reached its initial goal in under a week, and at the time of writing, has received $43,432 in support.

Another major affirmation came at the start of this month, when Bifrost Biomechanics beat out 300 other entrants to win VietChallenge, a competition for Vietnamese entrepreneurs, hosted by the Massachusetts Institute of Technology (MIT). For having the best designed, planned and presented business idea, Bifrost BioTech Inc. was awarded $10,000.

Backbone straps across the shoulders with a monitoring device situated over the wearer’s spine, between their scapula. The physical structure provides back support, and the monitoring device collects data, which it sends to an app to be interpreted. The app converts the raw data into actionable information. Users can track their posture, get a buzz on their phone when they slouch, and receive reminders to stand up or take a break.

The inspiration for Backbone came from Phan’s use of a more typical back support product, which was bulkier, and had no software component.

“The back support was nice, but what I really wanted was something that would help me change my underlying habits,” he notes. “Tracking your progress lets you be more motivated. It makes your efforts real.” 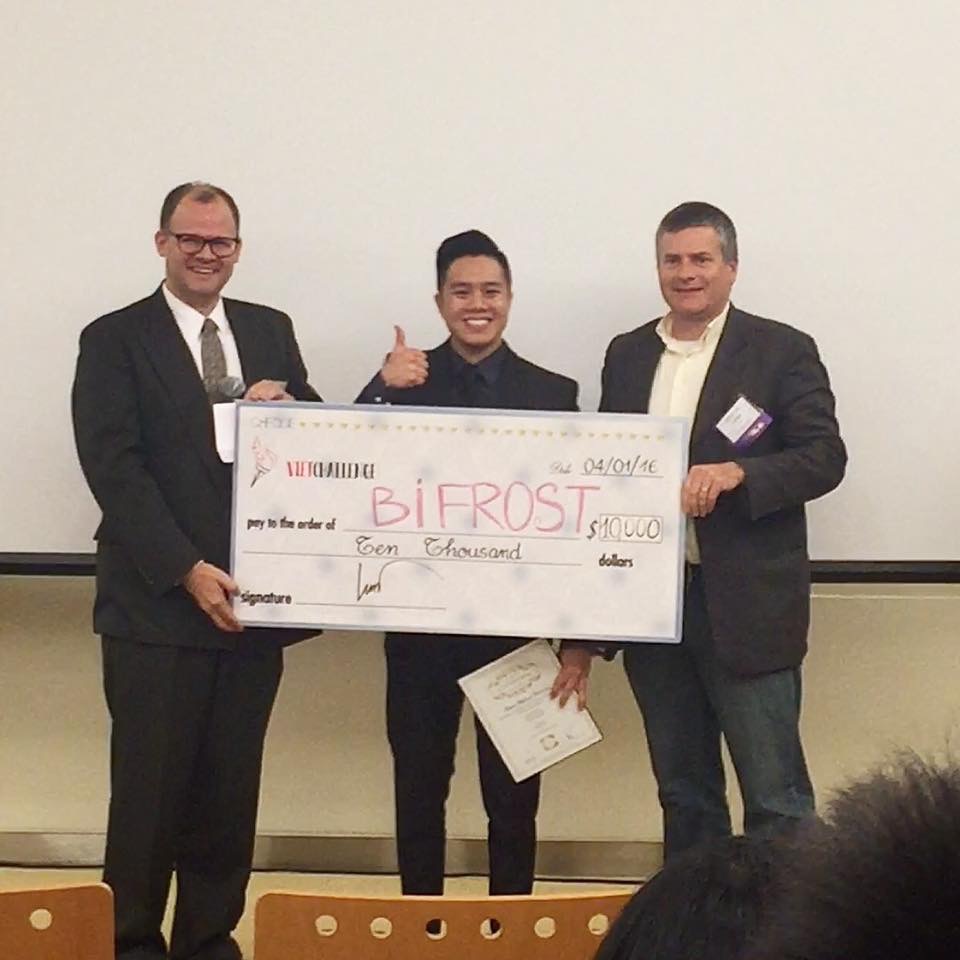 Phan receiving the award for winning VietChallenge at MIT.

Phan is an entrepreneur at heart. When he graduated high school, he felt college wasn’t the right step for him, so he started a marketing company. He found he had a knack for the work--the company was profitable within the first year, and he scaled up the business to millions of dollars a year. Not wanting to devote his career to sales, he started exploring other avenues. While still involved with his marketing company, he started a mobile gaming company called Cozy Cove Studios. One of its titles, League Runners, had over 100,000 unique users.

Running Cozy Cove Studios gave him a glimpse into the world of software development. Gaining the skills to build software on his own felt like a logical next step for him. He looked into a range of coding bootcamps, eventually deciding on Hack Reactor.

“I chose Hack Reactor because it offered the highest quality education,” Phan explains.

“The most important thing [we learned at Hack Reactor] wasn’t programming, it’s how to learn. I think that’s priceless,” says Phan. This is a common accolade from Hack Reactor students: the program enables them to quickly tackle new topics and technologies. This became immediately relevant for Phan in building Backbone. He had no experience with hardware or React Native, which the Backbone app is built in, but with focused study he was able to build and program Backbone.

“I don’t think I would have been able to do it without Hack Reactor.”

Phan is currently working on Backbone full-time, with two other software engineers, including a fellow Hack Reactor graduate he met during the program.

Want to turn your business ideas into reality? Apply to Hack Reactor or any of our partner schools.