Most Interesting Thing: They talk a big game at Hack Reactor's development bootcamp about intensity, and how much time you spend coding, and all that. So after 5 weeks, is it true? Well I happen to use a program called “Rescue Time” which automatically tracks an­d categorizes all time spent on my computer. I’ve been using it for several months now, so I pulled up my data from June ’13 (pre HR) and also from August ’13 (first month of HR). What does the data show, and what does it mean? 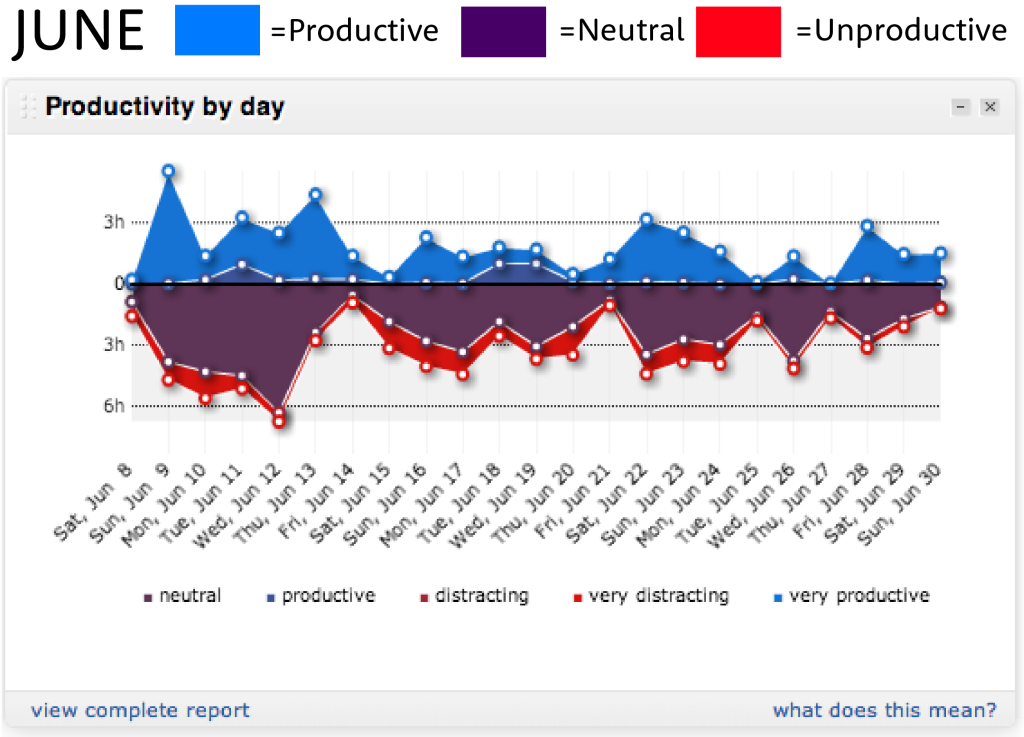 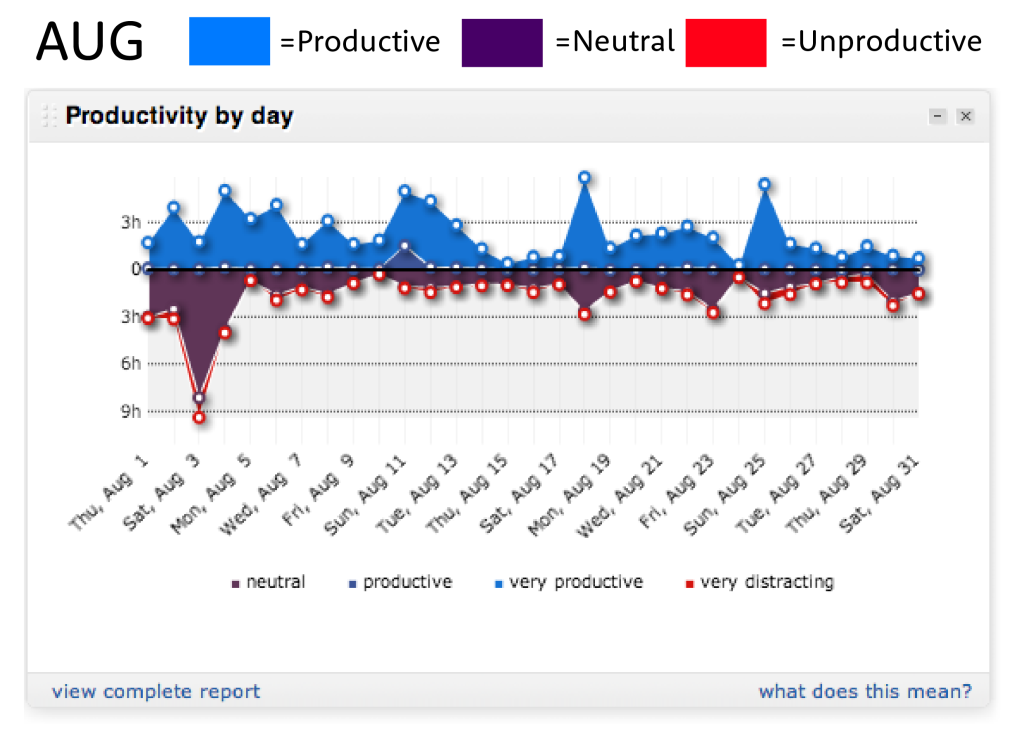 The differences may seem stark enough. Purple is greatly reduced, blue is way up, and red is virtually gone. Yet I should mention I do the vast majority of my HR work on their computers. That means none of those hours are logged to my Rescue Time. And almost all of that is pure coding. So really these numbers are highly skewed in favor of e-mail/scheduling and away from software dev. That’s because I do pretty much all my e-mailing on my personal laptop. E-mail counts as ‘neutral’ time, and code as ‘productive’ time, so basically purple is way higher for August than it should be, and blue is way lower. Here’s two more graphs that might be illustrative. These categorize my time, and again it goes June, and then August, and the same skewed relationship exists. 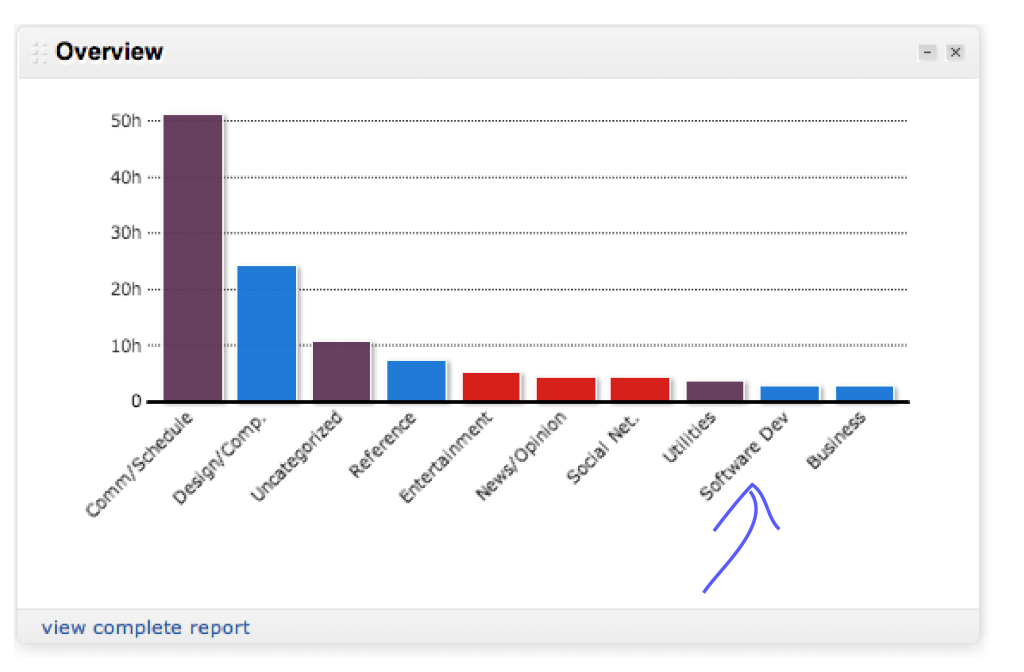 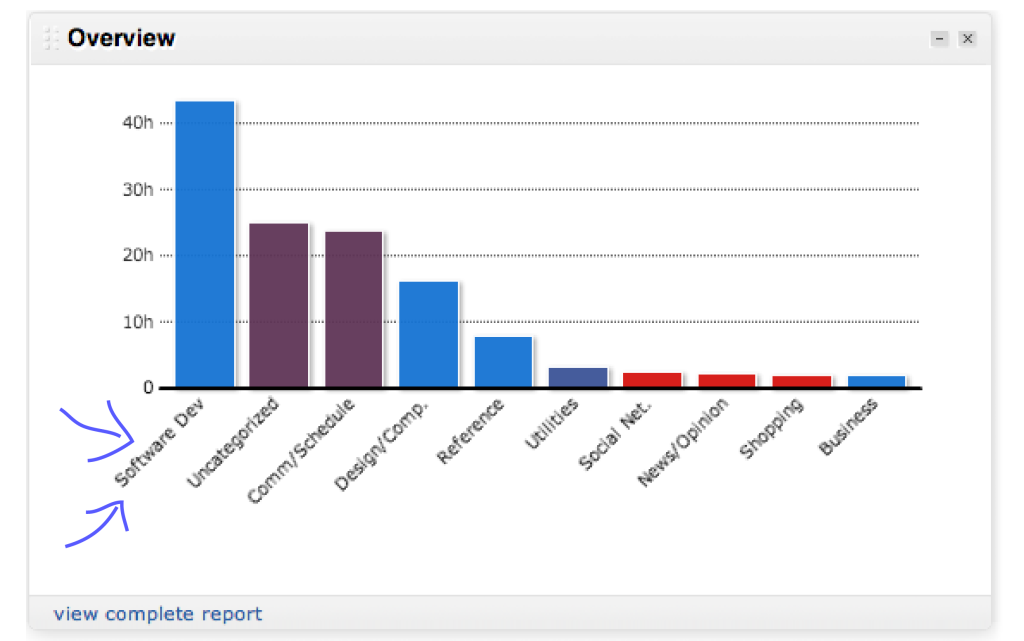 What does it mean? Well for starters, they aren’t joking. You really do spend pretty much all your time eating, sleeping, and breathing code. But more importantly, it’s taught me that e-mail isn’t as important as I thought it was. My life and relationships are still fine even though my response times have dropped off. I used to be pretty tenacious about getting back to e-mails within a few hours, if not sooner. I would feel like a jerk if I let something go for more than 24 hours. This meant I generally had a pretty clean inbox, and so felt like I could spend real time crafting good thoughtful responses. That’s great and all, but I’m sure I was in the “diminishing marginal returns” part of the curve. HR has forced me to simply only check my e-mail at night, or maybe for a few minutes at lunch. Because I have limited time, I prioritize. I say only what is necessary this particular message, and I hit the important messages first. These constraints have, oddly enough, made me feel more free. I’m not the slave anymore. I check e-mail when it makes sense, and not just to do it. I still feel compelled to respond in a timely manner, but I realize now that, in the vast majority of cases, 24 hours is just as good as 3 hours. I knew HR would teach me about code, who would have thought it would teach me about e-mail?

Hiring day happened this week. That meant the “senior” class (the ones who came in 7 weeks before us) presented their work to a room full of employers. These included big companies like LinkedIn, OpenTable, and Groupon, as well as a number of small startups. The number of employers showing up has grown, and what’s more encouraging is that many of the new companies are there because they recently hired someone from Hack Reactor. That means the earlier grads are creating a good reputation for HR grads.

What Am I learning?

Angular.js - This is a new JavaScript framework with many powerful features. It’s open source and free, but it’s ongoing development is supported by Google. It takes an entirely different approach to frameworks by literally changing what’s possible with HTML through a compiler that’s built in. It’s too complicated to get into here, but rest assured, if you’re a web developer, this is worth checking out.

Node – This is a tool we’d worked on earlier, but we got more experience with it this week as we built a back-end for the front-end that we created in Angular.js (see above). Was really good to get some review on this.

Review sprint – Because of labor day and hiring day, us Juniors were given two ‘free’ days to review all the past material. This was definitely helpful as we’d covered so much ground over the last 5 weeks, that it’s pretty helpful to patch up areas where we still felt unsure.

-Machine Learning – This was an optional sprint created by the class above us. I took advantage of this and worked on it for one day. It was a very brief crash course on the basics of Machine Learning, and the tools involved. While we didn’t actually end up doing a ton of code for this one, just learning the terms, and getting my development environment set up was extremely helpful. It’s also just super cool that HR let the seniors make their own sprint and share it with us.