From the headlines coming out of Apple’s big announcement day, it would be easy to think that today was about hardware: iPad Pro, Apple TV, new iPhones and the Apple Pencil. Scratch the surface, however, and what’s really being offered here are platforms. The iPad and iPhone have long been defined more by the apps they support than their native functions, and AppleTV is the latest and biggest step toward unleashing the power of software into the television experience. 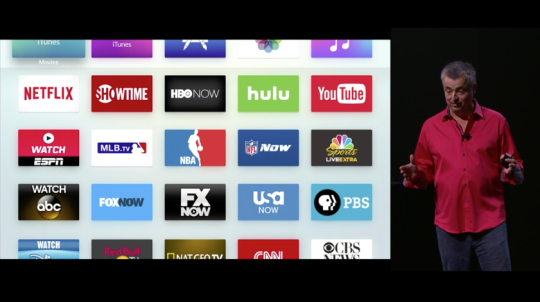 It’s easy to see why Apple is pushing television in this direction. The dominant devices of the last decade, the tablet, smartphone and laptop, have all thrived by being open software platforms, allowing the full creativity of the developer community to work their magic. Now Apple, as it did so successfully with the phone, is attempting to turn the television into a giant computer, which happens to be adept at streaming content. AppleTV will have a dedicated app store, and provide a unified platform for streaming, gaming, and more computer-esque functions like shopping and house-hunting. The last holdout among major screen-based devices is now becoming an app platform.

If the future of TV is apps, it lends more credence to the idea that the future of the economy is software. As the Internet of Things (IoT) movement takes off, more and more physical objects are becoming platforms. This has been true for decades with complex machines, like cars and factory equipment, but now software is working its way into more basic devices, like locks and lights.

The obvious conclusion one would draw here is that a functioning knowledge of computer science and software engineering should be part of our education system from an early age. This is starting to happen, such as in San Francisco, where the SF Unified School District recently worked with partner school Telegraph Academy on curriculum and teacher training for K-8 computer science instruction rolling out in all public schools. However, like most institutions of its size and age, the American education system has been slow to adjust to this rapid shift in the economy. Most university computer science courses are analogous to music theory classes: they provide useful background, but don’t necessarily make you a better player. Software is being woven into more and more devices, and a workforce that can shape the world we interact with will need an education based on the future, not the past.

Want to get the most efficient, effective coding education out there? Apply to our program, online or in four major cities, today.

Tessel Comes to Hack Reactor for an Inspiring Hackathon