Graduate David Ernst has studied both coding and meditation in immersive settings, and he finds many similarities between the two, and ways in which one can augment the other. Ernst had meditated in high school, but he was really awoken to its power three years ago, when he went on his first Vipassana retreat. This is a ten-day silent course, in which participants focus on their own breath and sensations for nearly ten hours a day.

“It was a pretty life-changing experience,” Ernst recalls. “I felt it opened up an entire new world around the subtleties of my own mood, habits and levels of attention. I became far more aware of different ways my physical body was connected to my mental state. I went into it with a good amount of skepticism, but I could see first-hand that if I just do this for 20 minutes, I will get drastically more calm.”

After spending a few years running his own non-profit, Ernst decided to invest in his own skills. He considered getting a B.S. in Engineering, but ultimately decided to attend Hack Reactor first, to see if that got him to where he wanted to be in terms of skills and connections.

“I’m super super happy with Hack Reactor,” he says. “After learning as much as I did, and being hooked into the Hack Reactor network, I no longer feel the same pressing need to get the bachelor’s degree.”

As he learned to code, Ernst found many ways in which coding and meditation overlap.

“There’s this notion in coding of ‘garbage variables’. That’s when you initialize variables and store them in memory, a garbage collector will go in and release them so you can use the memory for something else. For me, meditation is like garbage collecting for my own mind that allowed me to free up these mental knots and focus on higher priorities, as opposed to staying up at night worrying about some conversation I’m going to have tomorrow.” 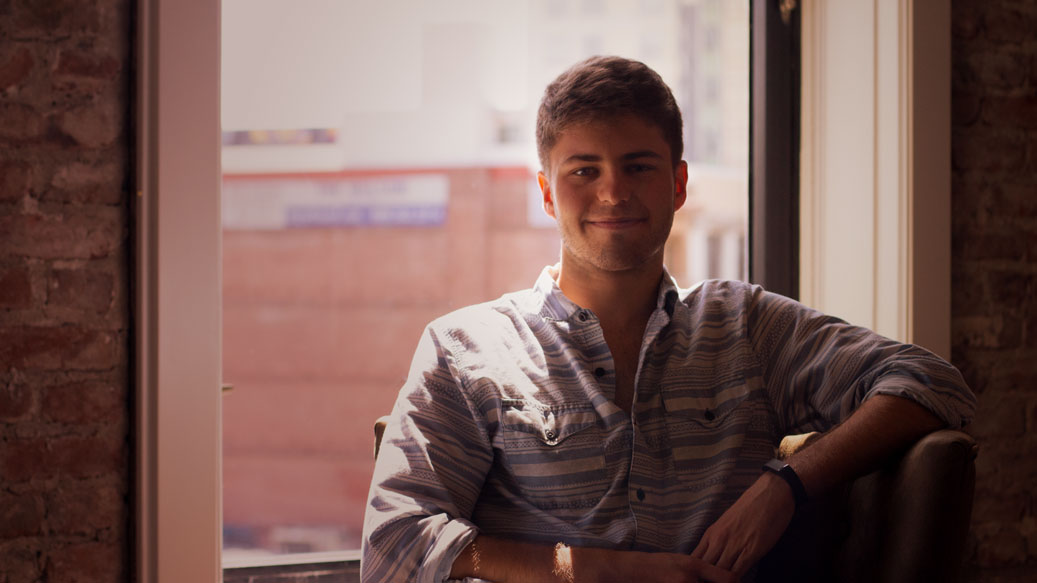 David Ernst is interested in the intersection of coding and mindfulness practices.

Ernst has also found that having a meditation practice has helped his programming abilities. Being able to mentally step back from a project is useful in architecting systems, and identifying parameters and bottlenecks. On a deeper level, meditation helps Ernst process the limitless range of possibilities one can apply the coding skill set to.

“Steve Jobs was famously into meditation,” Ernst notes. “He has this quote: ‘Everything around you that you call life was made up by people that were no smarter than you and you can change it, you can influence it, you can build your own things that other people can use.’ I think that that attitude is extremely clear for people who spend time meditating.”

This relationship between the two disciplines can go even further through apps and products that facilitate mindfulness, such as Spire, a wearable device that measures the user’s frequency and depth of breathing. While at Hack Reactor, Ernst built an app that takes on a near-universal problem: email clutter.

“I really hate how we hide our email addresses,” says Ernst. “I totally understand why people do it, but it seems like there is something broken with the system that we feel the need to do that. The dream is that we publish that information openly, and we actually hope that people write to us. The hope is that people would put a lot more thought into things.”

To address this problem, Ernst worked with three other Software Engineers to build Gilded, an app that allows one to put a price on reaching their email inbox. One can allow friends, families and others to email them for free, while spammers have to pay a penny or more.

“It was partly to stop the email scammers,” he says. “If they just had to pay one penny on each of those messages, their scams wouldn’t be profitable anymore. But Gilded also allows people to be more mindful about the cost of other’s people time. There are some people that are so freewheeling with it, because it appears to be free.”

Ultimately, Gilded is about reimagining how email functions in the world.

“The real dream is that people would add it to the email protocol. The entire ecosystem would be healthier for it. You’d have way less problems with spam and people wasting money on phishing scams. It was really to empower people from getting overwhelmed.”

This is the sort of impact Ernst seeks to have as he progresses in his tech career.

“That’s why tech is so great,” he adds. “It lets you reach thousands or millions or billions, in some cases.”

Want to join a growing network of thoughtful, talented coders? Apply to our program, online or in four major cities, today.