Hack Reactor held its biggest Hiring Day yet, with representatives from over 40 employers, including Cisco, Walmart, Ozy Media and JP Morgan Chase. Hiring Day allows students to display the largest, most complex projects they built while at Hack Reactor and meet with actively hiring companies for ten minute interviews. Students and employers are matched ahead of time by mutual interest, and many of these initial conversations lead to formal first interviews.

The day started with student presentations of projects, which ranged from a platform for language partners to a CSS framework that has already received lots of positive attention from the developer community.

“I definitely loved all the presentations,” said Cameron Desmangles of Level Studios. “I’m really impressed with the work that everyone’s put in.” 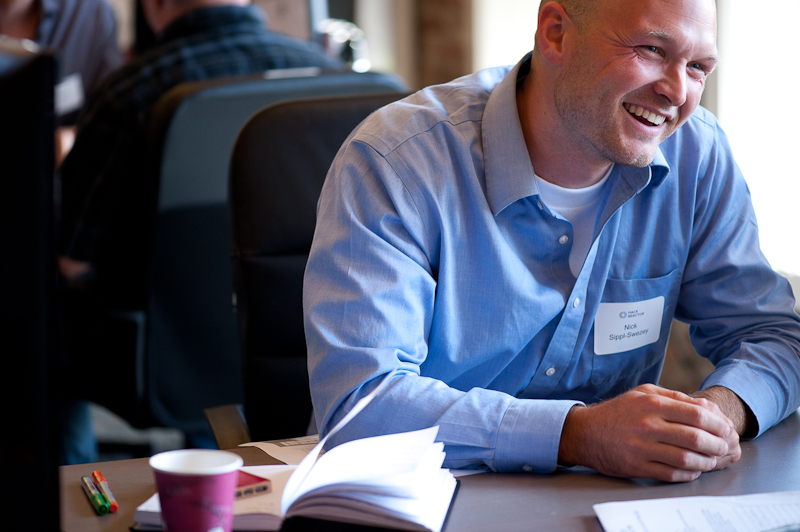 Our graduates meet with numerous hiring employers on Hiring Day.

“I thought the projects were fantastic,” added a representative from Komprise. “Some were really creative.”

“The presentations were really well done,” said David Matzner of uncleCare. “They illustrated that Hack Reactor does the end-to-end treatment--great software training, but also professional skills.”

The presentations were followed by ten minute interviews. Employers were impressed with the technical chops and diverse backgrounds of the applicants they met.

“The people that come out of this are pretty impressive,” said Christopher Paul, whose company Pariveda was returning for its second Hiring Day. “We saw last time as a test round, but the people we met stacked up really well with people who had 4-year CS degrees.”

Some employers found that they were able to find candidates with backgrounds particularly well-suited to their needs. This was the experience of Ashoka Rajendra of Syapse, a company in the health tech field.

He noted that he met multiple candidates who “have worked in healthcare and share the interest of many in our company of combining software engineering with healthcare to do something impactful. That’s something we’re really interested in.” 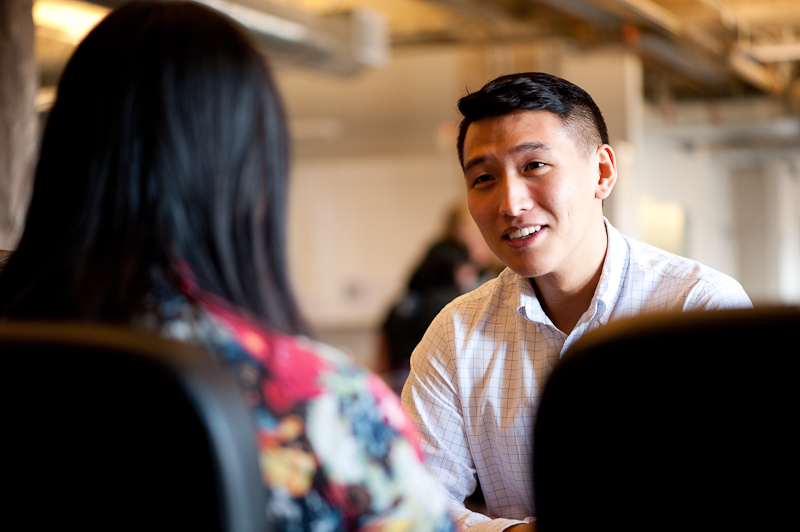 Many employer conversations lead to a formal first interview.

“We’re looking for our first engineer, so we need a real generalist,” said Storyworth’s Nick Baum. “We had one person who we knew right away that we should just move straight to the interview, and another couple strong potentials.”

There was broad agreement that Hack Reactor is an excellent place to find strong Engineers.

“I’m in awe,” said Desmangles. “I definitely like this. I think this is a great breeding ground for tech recruiters to find that next diamond in the rough.”

Woopra’s Elie Khoury said that he was “very impressed with all of [the candidates he met]. “It’s awesome. We’re big fans of Hack Reactor. If anyone wants to hire a JavaScript engineer, this is the place to be.”

After meeting some of our graduates, Matzner thought he might want to join them one day.

“I’d love to come back and be a student,” he noted.

To join our ever-expanding hiring network, get in touch with our Hiring Team. Want to gain cutting edge skills at the center of the tech scene? Apply to our program, online or in four major cities, today.

How Can You Go From Intern to CTO? Cofounder Shawn Drost Explains at Hirepalooza