Whether you are just starting a career or fully embedded in an industry, solid contacts are invaluable. Right now, people mostly use friends of friends or industry events to network. Social networks such as LinkedIn can be used to make connections, but like Facebook, LinkedIn is usually more about acknowledging an existing relationship than creating a new one, especially one of real substance.

That’s where Twenty comes in. The project, a work-in-progress from a team of Hack Reactor students, connects users with professionals in their industry area for 20-minute meet-ups. Rob Holmes, one of the Software Engineers behind Twenty, explains how they came up with the idea:

The original idea for Twenty was actually sparked by Ryan Stellar, our program coordinator. He mentioned that whenever he is walking around San Francisco or waiting at a BART station there are probably so many interesting people around (hackers, startup founders, etc) and it would be great to have a way to actually connect with them and meet them. We all connected with Ryan's need and ran with the idea, ending up at Twenty: an app that allows you to find and meet professionals in your area, based on your shared interests and experience. 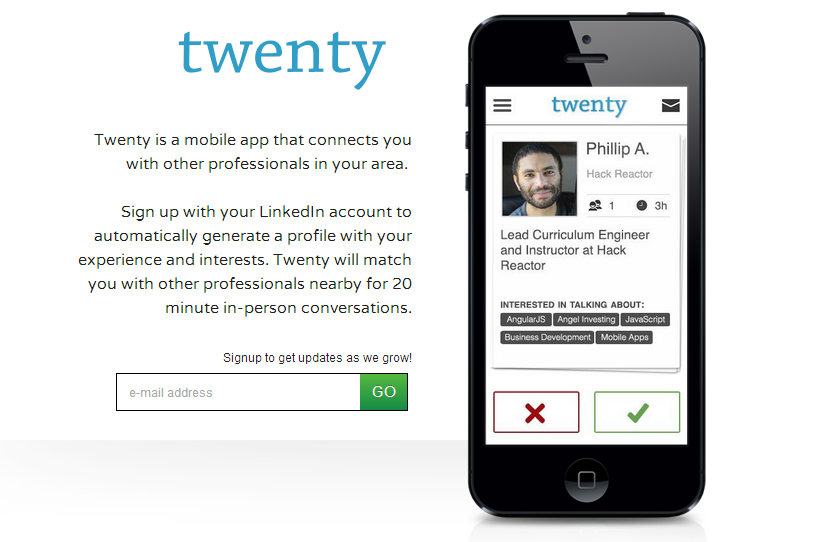 Users sign into Twenty using their LinkedIn account, and then use a Tinder-like swipe interface to approve or reject potential connections. Co-developer Ian Lyons describes the technical end of how Twenty was built:

We built the app on Cordova, a platform that allows wrapping of JS/CSS/HTML as a native phone app and exposes a good deal of the phone's functionality, such as geolocation, keyboard functionality, in-app browsers, and so on. We laid the Ionic Framework on top of that, which abstracts away a good amount of the complexity of building the various screen and menu states. It was also cool to see Ionic's CTO, Max Lynch, come to speak at Hack Reactor while we were in the middle of the project. Ionic is tied in very tightly with Angular, which is fantastic because it's something that the whole team really enjoys using.

Addison Lee, another member of the team, explains why they made these specific choices for the technology behind Twenty:

We chose these specifically so we could explore the latest and greatest technologies out there.  Even though we only had a short intro to Angular before this project and had never worked with Ionic or Neo4j [used for the database], we were able to take the skills and techniques we learned here at Hack Reactor to quickly dive and make meaningful progress.  Within days we had an MVP [Minimum Viable Product] up and running and had a fully functional app on our phones within 3 weeks.  As someone who had never written a line of code before joining Hack Reactor, it's been quite amazing to see how far we've come!

Twenty is a collaboration of Rob Holmes, Ian Lyons, Eric Craft, Wei Jia Mao and Addison Lee. They will be demoing their project at our upcoming Hiring Day on May 20 in downtown San Francisco. Check out the event page if your company is interested in attending, and for general info about hiring from Hack Reactor, sign up for emails here.

Why Should Your Company Attend a Hack Reactor Hiring Event?