Hack Reactor recently completed its first online immersive course, which brought together students in every corner of the U.S., plus one in Nigeria. The class used several apps to coordinate meetings, lectures, and group chats, including Google Hangouts for video conferences. Though Hangouts was usually up to the task, the group started to find ways that it could be improved upon. Inspired by Hack Reactor’s philosophy of constant iteration, they started working on their own video conferencing library. Thus, OurMeeting.js was born.

“The goal is to make it easier for anyone to make a meeting service,” explains project manager Gabar Ewen. Ewen built OurMeeting.js with remote course classmates Justin Cruz and Huy Pham. The library focuses on core functionality components of video meetings, and includes additional accessories. 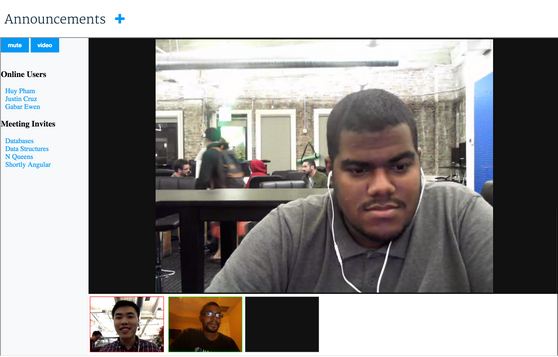 Reliability was an issue with Google Hangouts--too often, invites would fail to connect classmates to the video conference, or other technical snafus would get in the way.

“It became too much of a pain to start calls [on Google Hangout]” Cruz describes. “It took 10-15 minutes to get calls started. That’s a lot of time. You want to spend that time coding. It’s really draining to your momentum when you have to wait.”

The deployed demo version of OurMeeting.js has “much better video quality and much better audio quality and is much more reliable in general,” than Google Hangouts, classmate Chris Bradley told Course Report.

While Google Hangouts requires that meeting participants be invited through their email address, which can get cumbersome, especially with larger groups, OurMeeting.js includes functions to streamline invites.

“It’s easy for mentors or instructors to click a button and join the hangout,” says Cruz. The team also built a way to invite large groups into a conference with the press of a button.

The OurMeeting.js team lives in New Jersey, Georgia and California, but they stayed on the same page with frequent meetings.

“We had constant check-ins for progress to see how team members are doing and help stop them from getting lost in rabbit holes,” says Ewen.

One challenge this project presented was that the group was not able to see their product until late in the building stage.

“It was, at times, hard to see the bigger picture since we weren't developing a flashy app, or website that you can visually see the progress on as you go,” Ewen notes. “It wasn't until we made the demo site using the library that we were able to see our work in action. That was the biggest triumph.”

The group had an eye toward making OurMeeting.js a library that a developer could easily integrate on their own.

“We wanted to make things easily understandable from a developer point of view,” says Cruz. “We were trying to make it minimal whenever we could, so we were just using pure JavaScript whenever possible.”

The library was built with WebRTC, Socket.io, Node.js, Express and Mocha.

Want to join the next class of Software Engineers in our online or onsite program? Apply to Hack Reactor today!