Frank Bowers came to Hack Reactor after 26 years as a Software Engineer to facilitate a transition from building user interfaces on the desktop to web development. Specifically, Bowers has a keen interest in data visualization, so he embarked on a side project to develop his skills in this area. His project, Bay Area Stats, uses D3 to display comprehensive data on salary, housing prices and racial demographics in San Francisco and the surrounding area in a highly intuitive format.

“I really like understanding data,” says Bowers. “I wanted to know about demographics, housing and income.”

Prior to Hack Reactor, Bowers worked in data visualization, data center console and Java development tools for companies including Cisco, Xerox and Borland. He has a patent for a technology he developed at Xerox that combines two data visualization technologies, Cone Tree and Perspective Wall. 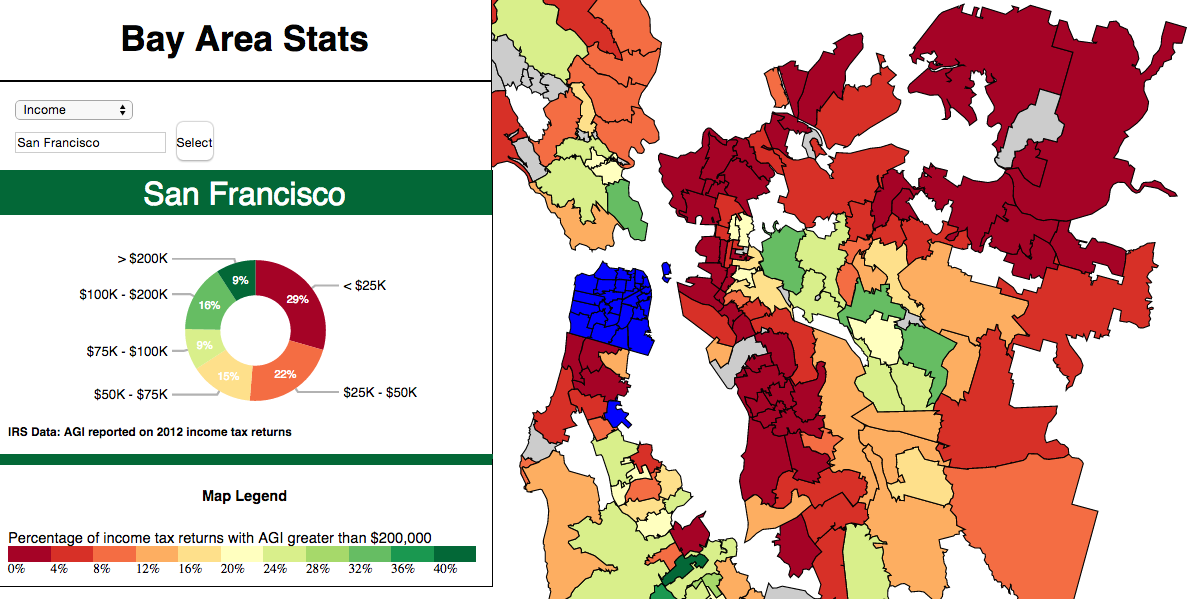 Bowers pulled demographic and income data from the US census, but found that the government’s housing data was ill-suited to the Bay Area.

Instead, Bowers used housing prices from Zillow and apartment rents from myapartmentmap.com, then processed all of this data into formats that could be used quickly and effectively in D3. “I retrieved multi-megabyte files and had to extract them,” he adds.

The map--pulled from official government data--also had to go through substantial processing before it could work well with D3.

Bowers explained how he built Bay Area Stats in an after-hours presentation at Hack Reactor:

In presenting these tools and methods to his classmates, Bowers aimed to open up a wide array of possibilities for working with maps and geographic data.

“I wanted to show all the opportunities there are for bringing in the vast trove of open source maps to D3,” Bowers says of his presentation. A central takeaway was “how to deal with showing an open source map in a web browser so that it has good performance.”

While he has been working in data visualization for years, Bowers is thrilled with the set of web-based tools he has developed since he came to Hack Reactor.

“I’ve always been interested in charts, graphs and maps, but it’s just fantastic to have tools that allow me to work with them on this level.”

Want to gain a cutting-edge skill set in software engineering? Apply to our program, online and in four major cities, today.