Blake Williams, our Director of Student Outcomes, spends his time at Hack Reactor helping graduating students get jobs that best fit their skills and personalities, but recently he spent some time with a different type of student. He spoke to high schoolers from across the country interested in becoming professional coders as a guest on the Next Steps panel at the National Youth Leadership Forum (NYLF):Technology and Innovation. This was part of a week-long immersive experience in getting to know the technology industry, put on by the NYLF, which included Hack Reactor as a leading member of the increasingly important coding school space. As the member of our team responsible for ensuring our outcome rates of 99% placed within three months at an average starting salary of $105,000, Williams is an expert on the technology jobs landscape. He was joined on the panels with executives from Draper University, 500 Startups, Dev Bootcamp and Vungle.

Though not yet out of high school, many of the attendees were actively mapping out their future in the tech industry.

“A lot of them wanted to know if they should work at a startup or an established company,” says Williams. “They were interested in growth-focused companies and disruptive ideas.”

He and the other panelists explained that startups are exciting and offer great potential for personal and professional growth, but the day-to-day work is usually not especially glamorous. 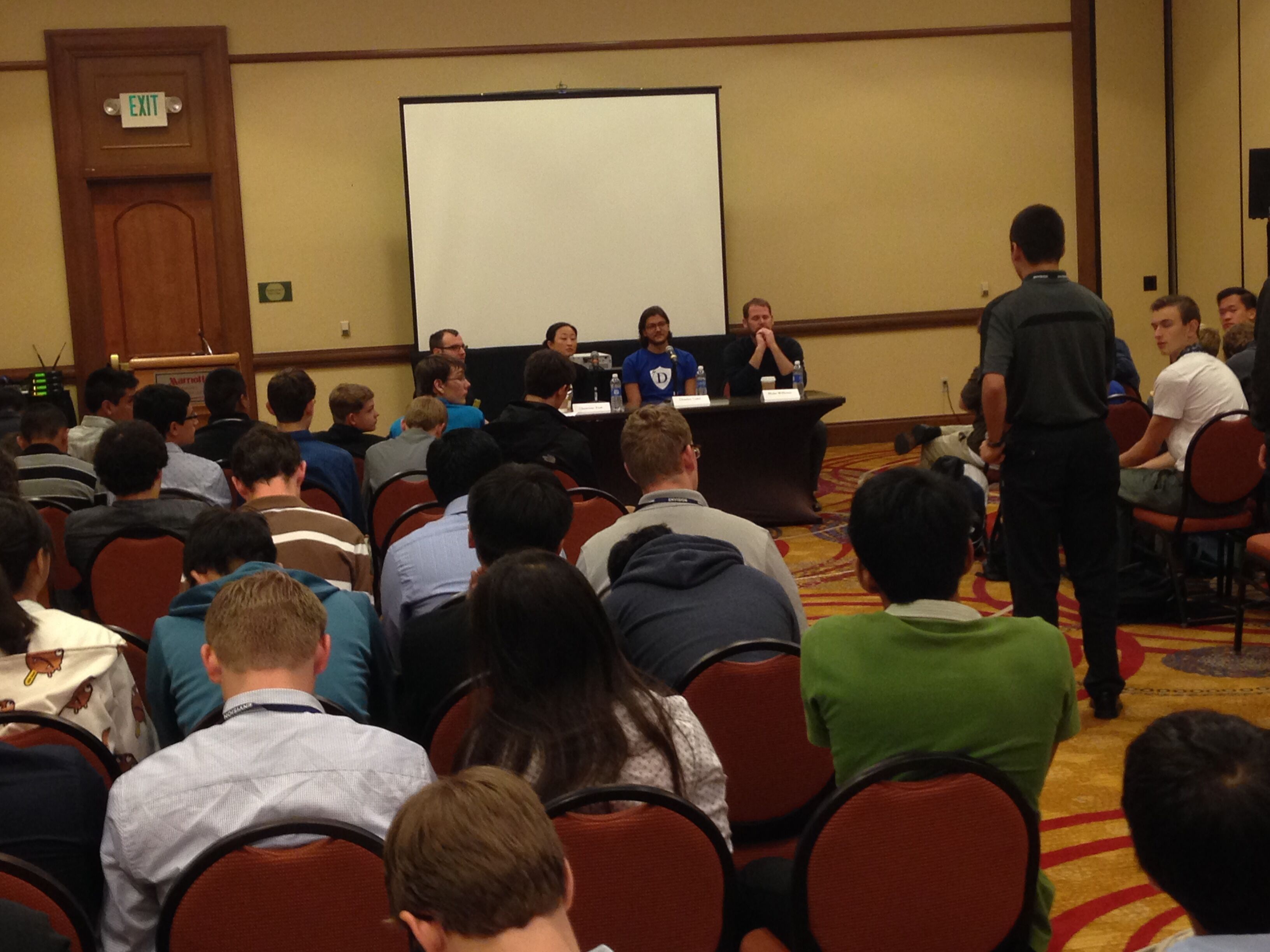 Blake Williams (at table, on right) our Director of Student Outcomes, spoke to high schoolers interested in tech at the National Youth Leadership Forum: Technology and Innovation.

As for where to get the skills to contribute to a tech company, many students asked about the possibility of eschewing college for a program like Hack Reactor, which would allow them to gain key skills very efficiently.

“What I tried to let them know is that each of them has a choice and there is no path that they have to follow,” Williams explained. “As long as they make educated decisions that come from the right place, they’ll be fine.”

Many of these high schoolers had already built games and were thinking about eventually starting a business. Williams, who spent ten years as a lawyer before moving into tech, fielded many questions about intellectual property, and a handful of students discussed their games or business ideas.

“There was a heavily entrepreneurial bent to the group,” Williams observes. “They are very ambitious in the best way. They seemed like they were sucking up the info we were giving like sponges.”

For Williams, the event was a homecoming of sorts. As a high schooler, he was student-body president, and very interested in politics. At 15, he went on a similar trip through NYLF to Washington D.C., focused on politics and government. While he was similarly focused and ambitious, he found that today’s NYLF Technology and Innovation students are more active in pursuing their passions.

“These kids are doing and creating a lot more than I or my peers were in high school,” he observes. “There were people from the west coast to New York City to the south. It was great to seethe ethnic diversity of the group, which is a good sign for the tech industry moving forward.”

All in all, Williams came away thoroughly impressed by today’s tech-focused youth.

“This little girl named Lily, probably 14, asked me if she could use me as the cornerstone of her professional network and add me on Linkedin,” he recalls. “I said ‘absolutely’.  I give her all the credit in the world--I would have been really intimidated at her age. I’ll never forget Lily.”

Want to join one of the most dynamic programs out there and accelerate your coding education? Apply to our program, online or in four major cities, today.