“The point of our product was to provide an all-in-one solution, and the ability to persist the data, because that’s a bottleneck right now,” says Garron Sanchez, who built HackBox with Michael Chen, Lauren McDonnell and Joshua Newman.

In the early design stages, the group got a big clue that they were building a viable product.

“We stumbled on the news that [online education company] Chegg had just bought a company that was incredibly similar to what we had designed, down to using the same technologies,” says Newman. “It was cool that we had only been here for 9 weeks and we were able to build something really similar to something that was in demand and just bought for a lot of money.” 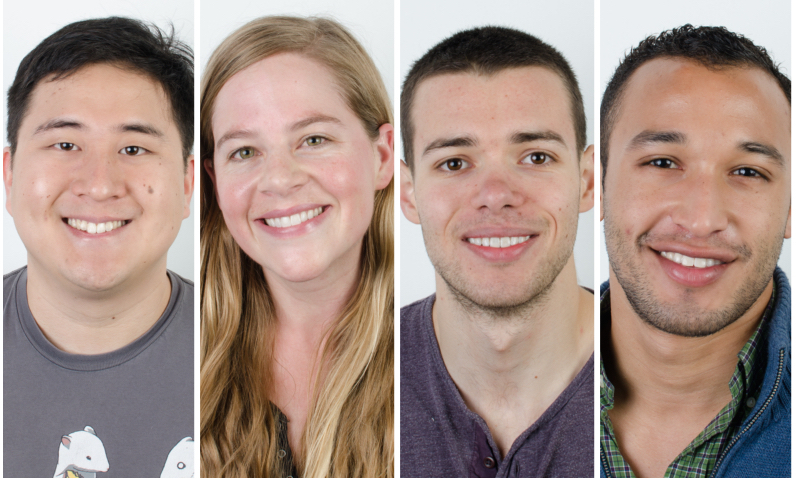 Finding an existing product to compare theirs to helped the team sharpen the vision for HackBox.

“It made us really define what our product did,” says Sanchez. “Ours was more for Software Engineers, there’s was more of a study tool.”

In addition to its core functions, HackBox has several features that streamline the technical interview process. The interviewer maintains control of who can access the interview “room” and when they can do so, allowing interviewers to set up toy problems prior to inviting the interviewee in.  After the interview concludes, the whiteboard, coding space and note tab are all saved and can be accessed only by the interviewer.

HackBox was built using 20 different technologies, but one that played a central role, Icecomm, was built just months ago by another student group at Hack Reactor. The two groups were in regular contact over nuances and bug fixes around Icecomm, which greatly benefitted both teams.

“Icecomm, is the engine that fuels our video and audio, but also our text editor. It allows you to send video and audio without a server in the middle,” explains Chen.

“It was awesome to work on the real cutting edge of technologies and to be able to have that feedback with our developers,” Newman adds. “Once you realize you can build on things, it’s incredible how much you can do in a short amount of time.”

While having access to the creators of a technology was a perk, the reason the HackBox team used Icecomm was that it was perhaps the best option available.

“There wasn’t really another API that did what icecomm did or does. Icecomm was very easy to setup and use,” says Chen.

The HackBox team had many willing product testers, because our technical mentors conduct admissions interviews online, and they were eager to provide feedback on a tool that could potentially be quite useful to them.

“We almost had a startup-like environment where we had mentors in the industry,” says Newman. “We had live A/B testing if we needed it.”

Want to join a thriving community of developers? Apply to our program, online or in four major cities today.