News broke last week that Uber will be purchasing a large building in downtown Oakland--the historic “Old Sears” building--marking the most significant move of the technology sector into the San Francisco area’s East Bay. With Silicon Valley and San Francisco becoming saturated with tech companies, the East Bay, particularly Oakland, has long been eyed as an inevitable area of expansion for tech companies. The general sentiment in Oakland has been a mix of excitement and trepidation. In part due to the tech boom, San Francisco is now one of the most expensive places in the world to live and there is a justified fear that low-to-middle income residents of Oakland will eventually be pushed out. TechCrunch’s Kim-Mai Cutler (@kimmaicutler) articulated many of these feelings in an article titled, Oakland to Tech: Please Don’t Screw This Up Like Last Time:

“Uber is projected to bring 3,000 jobs to the city, making it the largest employer in the city that isn’t a government agency or medical center….”

“Tech companies that move into Oakland will need to challenge their own assumptions about who can and can’t do the work. For instance, think about the $25,000 to $40,000 that tech companies routinely pay to recruiters as a percentage of a successful hire’s first-year salary. Could some of that be put to work in educational or training programs that level up local residents who have the drive and ambition instead?” 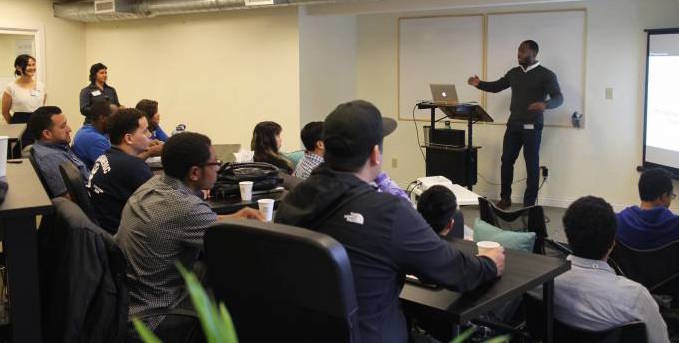 Cutler’s suggestion that recruiting funds be reallocated toward training is a strong one. Uber has worked with Hack Reactor Core network schools MakerSquare and Hack Reactor Remote Beta, and it’s clear that the company values the training we provide to our students. One of our partner schools, Telegraph Academy, is working in the East Bay to train underrepresented minorities in software engineering, and Cutler spoke to school cofounder Albrey Brown on the issue of tech and gentrification:

“This is a very big chance for us to step up to the plate for everything we’ve been talking about for months and years about creating a different kind of tech scene in Oakland. We could make a blueprint for all the other cities that want to keep themselves more socioeconomically diverse,” said Albrey Brown. “Housing is definitely priority #1 but you also need to provide to community members — who are already here and are at risk of being pushed out — a way of getting into the community that’s moving in. I don’t think you can stop gentrification, but you can fight it. Jobs have to be a piece of that pie.”

A responsible approach to the rise of tech in Oakland will focus on efficient, effective training. Major employers like Uber, the city government, and the best accelerated learning programs should all be involved. Telegraph Academy and the rest of our network can be leveraged to help Oakland see an economic resurgence that benefits the whole city.

Are you interested in getting the best coding education available? Apply to any of the schools in our national network.