JavaScript is the dominant programming language today, and if anything, its hold is only getting stronger. That’s the conclusion of two recent articles from Arc. The first, by David Bolton, reports that RedMonk’s language rankings have once again placed JavaScript at the top of the heap. The second is an exploration by Dan Rowinski on JavaScript’s rising prominence in Internet of Things (IoT) technology. Hack Reactor, recognizing JavaScript’s growing prominence three years ago, has been JavaScript-focused since its inception, and partner schools MakerSquare and Telegraph Academy have adopted that mantle.

“JavaScript sat at the top of the tree when RedMonk last released its rankings in September 2015 and it sits there today. The default programming language of the Web has been a long-time presence in the table and looks unlikely to relinquish its ranking any time soon….The reason for JavaScript’s dominance is quite simple, RedMonk said. JavaScript is easy to use and developers want to build apps with the best tool for the job.”

On the ground reports back up the statistics compiled by RedMonk. Bolton states that JavaScript was the clear favorite among attendees of the leading engineering conference DeveloperWeek:

“If anyone needed further proof that the programming language is crushing the competition, then a straw poll of attendees at DeveloperWeek in San Francisco would have given the required answers. Almost every panel praised JavaScript, so much so that fans of other programming language were hard to find.”

Here are Redmonk’s rankings of languages, quantified by popularity on GitHub and StackOverflow. JavaScript, on the upper right, is the leader in both metrics: 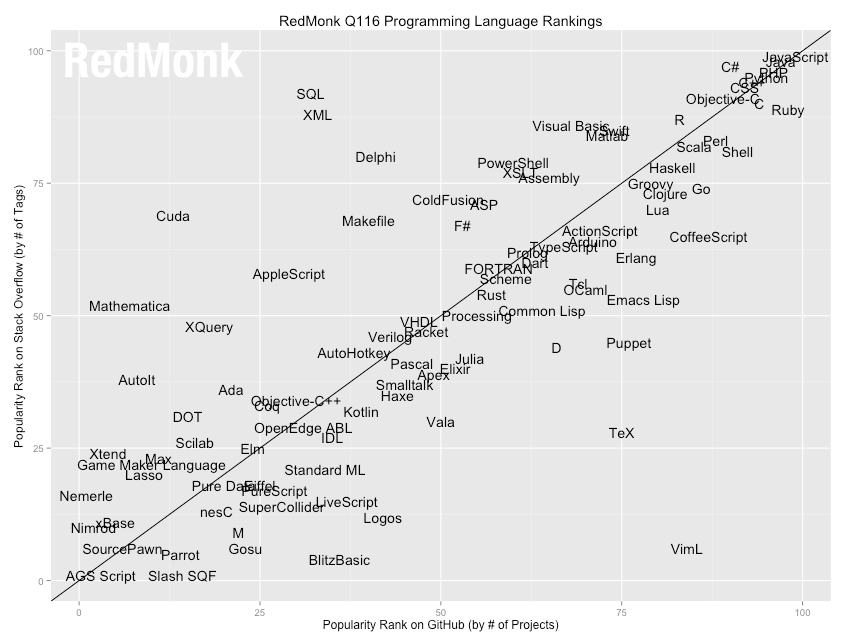 Within languages--the world of libraries and frameworks--change is the norm, and what’s trending today may be old news in six months. Rather than causing the same sort of tumult among languages, the rapid pace of innovation within languages seems to have stabilized the industry role of the languages themselves, at least when it comes to JavaScript. The incredible flexibility of JavaScript has allowed it to become established as a backend technology, via frameworks such as Node.

Rowinski explains how the underlying structure of JavaScript makes it well-suited for server-side programming (a.k.a. “back-end”) and has a future as a crucial Internet of Things language:

“The reason that JavaScript works for the Web is the same reason that it works on the server and will eventually work for the Internet of Things: its prime feature allows for parallel programming, letting certain features run while not inhibiting others. On the server, Node.js is event-driven, which makes it perfect for running fairly simple devices that send data to a Web client and a server.”

The ongoing progress within JavaScript has allowed JavaScript developers to work on all sides of the software industry. In addition to Node, there is a steady evolution of front-end libraries such as Angular, Backbone and React, database technologies and package managers. Hack Reactor students learn a slew of these technologies, all while deepening their understanding of computer science fundamentals.

As Rowinski notes, this same energy and creativity to make JavaScript more powerful and able is already having a profound effect on the burgeoning Internet of Things field:

“A growing variety of projects have cropped up over the last several years to combine JavaScript and Node.js to the Internet of Things. Node-RED is a visual tool for wiring the Internet of Things built by members of the IBM Technology Services team. The Things System is a system of components and protocols running Node.js. Noduino is a JavaScript and Node.js framework for Arduino controls that also uses HTML5 Web applications and Socket.io. DeviceJS from WigWag is built on top of Google’s V8 JavaScript engine with a real-time JSOn database. Cylon.js is built to control robots and things with JavaScript. The list goes on and on.”

While programming languages are generally created with specific goals in mind, often connected to the needs of developers at a certain point in time, eventually, the logic of the language reveals its long-term usefulness. JavaScript’s rise to the top has shown the power of a flexible platform for developers to build second-level technologies on top of. That is why there is sustained demand for JavaScript developers, especially those that carry a nuanced understanding of JavaScript libraries and frameworks and the fundamentals that tie them all together.

Experience the best JavaScript education available today. Apply to Hack Reactor or the other schools in the Reactor Core network today.

Which Hack Reactor Course is Right for You? Here’s How to Find Out